What's a connectome good for anyway?

If you've been following the Brain Activity Map (BAM) buzz out there, you've probably stumbled across an incarnation the following meme:


Indeed, the complete wiring diagram, or “connectome,” is known for only a single nervous system, that of the tiny worm C. elegans, with 302 neurons connected by about 7,000 synapses [5],[6]. Interestingly, the utility of the connectome in C. elegans is somewhat limited because function is highly multiplexed, with different neurons performing different roles depending on the state of neuromodulation [7], possibly as a mechanism for compensating for the small number of neurons.


The only complete microscale connectome was mapped back in 1986: the nervous system of a nematode worm called C. elegans. This worm has a total of 302 neurons, which make only 7,000 connections – far fewer than the trillions in our own brain. So can we predict or simulate a worm’s actions as the BAM proposal suggests we could? 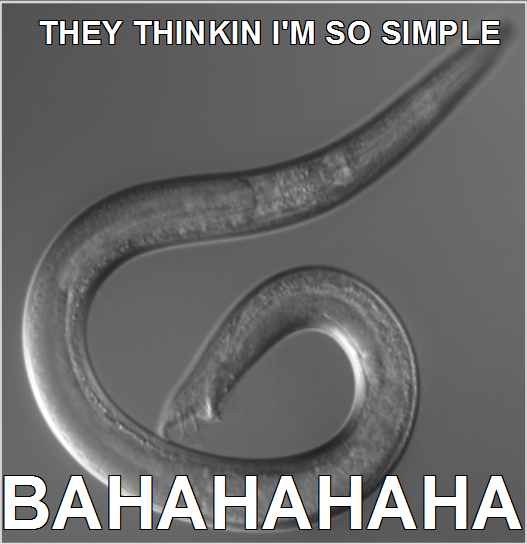 
A connectome, for those uninitiated into the church of Sebastian Seung, is the complete wiring diagram of a nervous system.  Every single neuron, every single connection between them.  Which means, if you're fond of the brain-as-computer analogy, that knowing the connectome naturally leads to knowing everything.  Once we figure out how it's all wired, surely we'll know how the thing works, right?

Except, as the quotes above attest, it's rather easy to blowtorch the connectome-as-holy-grail strawman.

For one thing, it turns out that brains aren't computers.  Connectomes are static images of fundamentally dynamic systems whose physical architecture can and does change over time (not so much with computers).  Even within that static snapshot, you can't tell if a given synapse is excitatory or inhibitory or silent.  You can't tell how strong each synapse is nor what neurotransmitter is released at each one.  Can you even find electrical synapses?  And good lord, what about neuromodulators?  These are neurotransmitters that can be released at great distance from their site of action, and can fundamentally alter the state of the system.  On and on and on and on, there's SO MUCH that connectomes don't tell us.

So what's a connectome good for anyway?

Let's give $3 million award winner Cori Bargmann a chance to answer that:

"Some people say we don't know anything about how C. elegans's brain works and I am like, 'Yes, we do!'" says Cornelia Bargmann of The Rockefeller University, who has studied the nematode for more than two decades and attended the Columbia debate. "A lot of what we know about C elegans's rapid behaviors we have learned through and with the connectome. Every time we do an experiment, we look at those wiring diagrams and use them as a starting point for generating hypotheses."


The connectome, in other words, is a beginning, not a destination.  Understanding the function of the nervous system - the nitty-gritty of how it senses the environment and generates behavior - certainly involves the connectome.  But ultimately functional understanding comes from functional studies.

Fine, you might say, but if we've had the C. elegans "starting point" since 1986, how come we still don't understand it?  If the thing's only got 302 neurons and 7000 synapses, you'd think you guys could sort it out in twenty-six years, right?

The problem isn't that it's just too hard to understand how 302 neurons and 7000 synapses form the basis for a functional nervous system that intakes sensory information from its environment, integrates it, and generates behavioral responses.  The problem is that it's hard to understand how those 302 neurons and 7000 synapses do all that -- in C. elegans.  It ain't the neurons' fault - it's the animal they're in.

C. elegans is a wonderful experimental system.  You can mess with its genes - turning on specific genes in specific neurons.  You can create mutant animals that express genes the wild type C. elegans genome lacks.  You can employ both sensory and behavioral assays.  You can look at one neuron in one animal and find the homologous neuron in another (a real luxury!).  And you have the connectome.

But the connectome is supposed to lead to function, and testing function ultimately involves some form of physiology.

When I say "physiology" I mean any technique that a scientist can use to monitor neuronal electrical activity directly or indirectly.  If the connectome gives you the wiring diagram, physiology gives you the tools to discern the properties of the resistors, transistors, capacitors, and whatever else is on the circuit board.  So if you see from the connectome that neuron A is connected to neuron B, you would use physiological techniques to determine exactly how strong that connection is, for example.  Does that connection's strength vary in the presence of different neuromodulators?  Different behavioral states?  Is it plastic - can it adapt over time?

Unfortunately, it's with this kind of physiology that C. elegans as an experimental model organism historically has had its shortcomings.

Traditional physiology means electrodes.  Ultra-fine-tipped glass tubes that you poke into a target neuron in order to record its electrical state.  This, in C. elegans, is HARD.  It's been done - but it's not fun.  Because the whole animal is only 1 millimeter long, the neurons are super-tiny (2-3 microns) - and they're encased underneath a body wall of an animal that's fond of moving.  Without going into details, let's just say that it's beyond the realm of possibility that someone will be able to do pairwise recordings (that is, sticking an electrode into neuron A and another one into neuron B) between all 302 neurons in order to figure out how exactly the synaptic connections observed in the connectome relate to their functional strengths.  Traditional, direct physiology is out when it comes to making the "brain activity map" for C. elegans.

What about indirect physiology?  There's more promise here.  Neurons in C. elegans undergo upticks in intracellular calcium when they're active.  We can measure this signal by forcing the neurons to express a gene that encodes a special fluorescent protein whose intensity varies directly with calcium concentration.  High calcium -> high fluorescence.  Of course, calcium is only an indirect measure of electrical activity, and therefore it's still rather difficult to go from calcium imaging to full-blown circuit busting.  For instance, you can know that neuron A and B are synaptically linked (from the connectome), and that when A experiences a bump in calcium, B tends to as well.  But this is the crudest measurement of synaptic strength - to truly understand the functioning of the circuit, one would need to measure the actual electrical currents within B as A is active.

Nevertheless, linking sensation, behavior, and calcium imaging with the connectome is a major goal of current C. elegans research.  And this goal is precisely what's being proposed as a first step in the BAM project:

C. elegans is the only complete connectome (302 neurons and 7,000 connections) (White et al., 1986), and all of its neurons could be imaged simultaneously with two-photon imaging and genetic calcium indicators.


With such comprehensive imaging data (every neuron at once!) of C. elegans engaging in various sensory and behavioral assays, one effectively generates a real brain activity map.  It's hoped, then, that computational modeling will be able to bridge the gap and generate testable hypotheses explaining how the observed activity is linked to the known connectome.  And voilà!  The structure-function nut is cracked wide-open.

Great! you might be thinking.  With 3 billion dollars, BAM is going to help us solve the nematode brain!!

Ok, you weren't thinking that.  But the beauty of neurons is that they be neurons wherever they be neurons.  The principles that we discover within the structure-function relationship of the C. elegans nervous system are likely to be common to other animals.  Or at least that's the hope!

Of course, there will be differences as well, probably some surprising ones too.  In Part Two (to be written when I get around to it...) I'll take a look at the state of connectomics in the famousest of all experimental organisms: the mouse.
Posted by Jason at 10:09 AM