About this time last year, I was at a recruitment event for our program when I got to talking to a professor who attended.  We got on to fancy new techniques, and somehow arrived at a moment in the conversation like this:

Him: "Well it's not just going to be about connectomes anymore.  People are in meetings now where they're talking about recording the activity of every single neuron and getting an 'activity-ome'. "

Me:   "What?  How is that even possible?  Are they going to make little nano-bots to attach to every neuron and somehow record from them?"

Him:  "Actually, yes that's exactly what So-and-So wants to do."


Now, this conversation was mainly about the Allen Brain Institute and where that was going, but it seems that these conversations he was referencing also eventually led to the Brain Activity Map Project now in the news (people from Allen, including So-and-So, are listed in the acknowledgments of the BAM project's NeuroView article in Neuron).

So, uh, what's this nanotechnology stuff then?  Here's their plan:
Sound crazy?  Maybe.  What we do now is stick electrodes into neurons, which directly record their spikes by sensing the flow of ion-mediated currents.  That gets sent into an electronics box and eventually a computer that records the currents over time.  This approach is like making a biological electrode and recording system all in one tiny 5 micron package.

But wait - where does the mind control come in?  Well that comes from this passage in their paper (my emphasis):

Potential options for a human BAMProject include wireless electronics,safely and transiently introducing engineered cells to make tight (transient) junctions with neurons for recording and possibly programmable stimulation, or a combination of these approaches.


So the goal is to make these little biological recorders, and somehow introduce them "safely and transiently" into a person's brain.  Which, if I had to fill in the dots, basically means injecting a bunch of these into your spinal canal, and letting them diffuse into the brain through the ventricular system.  I can't see tiny cells getting across the blood-brain barrier otherwise.

Would this be safe?  Uh... maybe?  As a labmate of mine put it, "I'm not going to let some scientists transiently change the capacitance of my neurons."  This references the fact that by attaching a fake cell to your existing cell, you might be changing the properties that govern how your existing cell normally functions.  And that might not be a big deal, or it might be terrible.

What makes it transient?  Not sure; there's no mechanism proposed.

And once you're done with the week of recording, how do you collect all these biological recorders?  If they just come loose and you do a lumbar tap to suck them out later, how on Earth do you figure out where in the brain they did their recording?  The people behind this project are super-duper smart  so they must have some idea for solving this, but if so they're not putting it out in public yet.

Finally, what's this "possibly programmable stimulation" part?  Apparently there's some way to get these cells to not just record the neurons they're attached to, but also stimulate them.  In effect, to control what they do.  This isn't that novel an idea - we do it all the time in other animals.  In fact, we do this in humans all the time as well.  For instance, we take surgical patients and zap their exposed cortex to map out areas that control important functions so that they aren't damaged.  But to do so in a non-invasive setting with "normal" patients?

As they later admit:

There are also potential ethical ramifications of the BAM Project that will arise if this technology moves as swiftly as genomics has in the last years. These include issues of mind-control, discrimination, health disparities, unintended short- and long-term toxicities, and other consequences.

Good on them for being up-front about the "potential ethical ramifications".  They could have left that point out, but they didn't.  I'm worried, though, that this might turn into a really nice Rush Limbaugh talking point:

"Obama wants to spend billions of your tax-payer dollars to make nano-machines that they can put in your brain and read your thoughts.  Not just that - they can do mind control.  Mind control.  I'm not making this up, folks.  It's in the paper these scientists wrote, verbatim.  Mind control."

After all, this is a minor thing.  It's not a proven technology.  It's just a dream on a piece of paper.  The rest of what they propose is great - and it's especially clever in setting up a nice funding side-pot for doing the basic neuroscience research that they wanted to do anyway.  But this part is already in the press.  In fact, it's the only part in the press:

One possibility is to build a complete model map of brain activity by creating fleets of molecule-size machines to noninvasively act as sensors to measure and store brain activity at the cellular level. The proposal envisions using synthetic DNA as a storage mechanism for brain activity. (NYTimes)


Which means this mind control thing is going to come up eventually.

So to the BAM people: better figure out how to communicate around this!  If this is your flagship technique that makes the whole thing worthwhile because you could do it in humans, you better have some good explanations for how the benefits of developing this technology outweigh the risks enough to justify the cost of the project.

Or maybe that won't matter because House Republicans don't want to spend on anything.

Prescience confirmed, readers!  I am the Muad'Dib of neuroscience.  (too nerdy?)

Any objection to BAM that says "whoa, we can't do mind control!!11!" implies that not doing BAM means no mind control.  That's silly.  Technology plods ever onward - BAM only accelerates the pace.  The authors are right, as I said, to address the ethics now.  That said, they don't have an ethics problem right now.  Right now, it's a communication problem - they're selling this like a human project (or, at least, the NYTimes sold it that way) and this dream technique is all they've got for doing million-neuron recordings in humans. 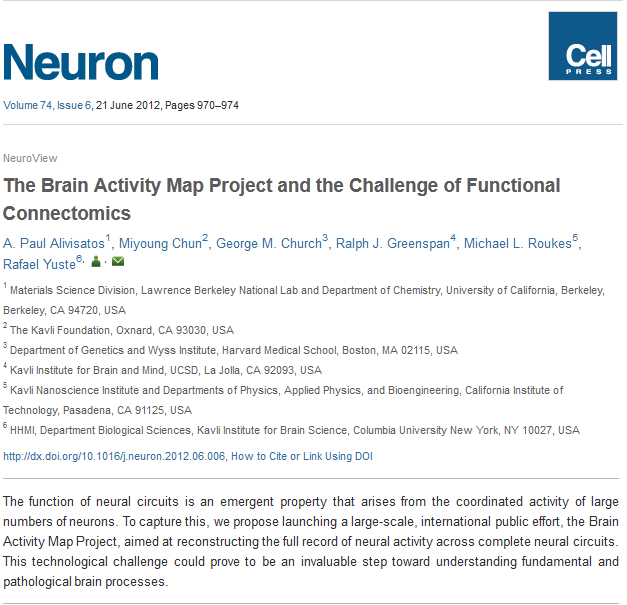